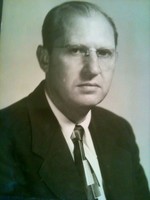 Wesley Baker was born in Beaver, Utah on February 9, 1908. He was the last of eight children of Dorothy and Phillip Baker. He attended the University of Utah graduating in 1929 with a BA degree in Music. During his college years he spent his summers barnstorming with his orchestra in towns in Utah, Idaho and Wyoming. He received his Master of Arts in music from Columbia University in New York City in 1935. During his stay in New York he met his wife, Adele Langenbahn, and was married in 1936. They had four children – Paul, Doris, John and Ann – all who completed their education in Montpelier schools.

Following his under graduate work in 1929, he took his first teaching job at Montpelier High School, where he remained for 35 years. In addition to teaching a full range of high school music classes, he taught elementary and junior high band. On nights and weekends, he gave private piano, vocal and instrumental lessons to students of all ages. Throughout his teaching career he was known to challenge his students, both individually and as groups, with difficult pieces of music. The skills and capabilities of his students were demonstrated time and again at the district, regional and state music competitions. A large number of his students carried on their music activities after leaving school.

His bands were known to play very challenging pieces, notwithstanding the suggestions of competition judges that he should choose a repertoire of lesser difficulty. He never changed his approach.

While his bands and piano students were greatly appreciated in the community and by others in his field, his greatest works came from his choirs. He directed freshmen women’s, women’s, men’s and mixed choirs. His philosophy was that anyone was welcome to sing in his choirs and would learn not only to carry a tune but also to read difficult pieces of music. His work with choral groups was renowned in music circles throughout the State of Idaho. What his students (and the community) most remembered were the annual Christmas cantatas. His choirs performed a wide variety of works – always including selections from Handel’s Messiah.

During his time in Montpelier, he served as a city council member for two years and then Mayor for two terms in the 1950’s.

While teaching, he was appointed by the Idaho Education Association to be part of a group to organize a health care organization for Idaho school instructors. The resulting Idaho Teachers’ Mutual Benefit Association was approved by the Idaho Insurance Commission in 1955. In 1960 he began a two-year term as president of the Idaho Music Education Association. He also served on the Idaho High School Interscholastic Activities Association for three years, 1960-63. He retired from teaching following the 1962-63 school year. He was immediately appointed as the Manager of the Idaho Teachers’ Mutual Benefit Association in that year and served until retirement in 1973. He spent his retirement years in Boise until his death in 1996.