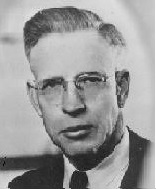 Elementary schooling in Montpelier Public Schools, old Washington School building. Completed the eighth grade in spring of 1906 in class of seven members under the tutelage of very capable old maid teacher from state of Iowa, Miss Winifred Hughes, very demanding and a strict disciplinarian. Have always felt that she laid for us and in us the wholesome respect and desire for excellence in scholastic attainment.

In the fall of 1906 Montpelier High School began its scholastic career with students from the previously separate elementary schools, Washington and Lincoln, these having been combined in one school district, Montpelier Public Schools. For some reason not fully understood at that time or since, my parents decided to send me to Ogden to live with my married sister, Mary Guernsey, there to attend Weber Stake Academy, a Mormon secondary school institution. President David 0. McKay for the first year of my attendance was Principal, succeeded by Wilford M. Mc Kendrick. Graduated June 1, 1910. Class of 36 students. President of Junior Class. Student Body President, Senior year.

Valedictorian for Class of 1910.

Advanced education (above high school) a much rarer accomplishment in those days and teacher requirements correspondingly low. Lack of financial backing for college attendance forced immediate employment after high school graduation. Consequently, started teaching career as instructor of eighth grade at old Washington building in school year of 1910-11. Taught here for two years, then filled a two year mission for the L.D.S. Church. Returned to Montpelier as High School Principal until the spring of 1916. Had had some work at University of California during summer sessions, reentered here as regular resident student, summer of 1916 and continued until entry into military service in summer of 1918.

Upon discharge from service resumed teaching as High School Principal in 1919?20. Granted leave of absence for 1924-25, Returned to University of California spring of 1925, with summer, regular spring and summer session was granted permission to graduate in August, 1925.

Graduated with honors in Education and was elected to Phi Beta Kappa, Alpha of California. Resumed principal ship at MHS in 1925?6 and until 1936. Became Superintendent of Montpelier City Schools, Montpelier School District 1A, holding this position until county re?organization in 1953?4.

During the period preceding 1936 I had undertaken graduate study during summer sessions at the University of Utah and had formulated plans and a program for securing the master's degree, The program was well under way when in 1936 I assumed the Montpelier superintendency, after which, as above stated, my time was completely consumed, winter and summer in the confining and strenuous administrative duties. It has always been a source of sore disappointment and more or less humiliation not to be able to boast the possession of a graduate degree, especially so during the later years when masters' degrees have become more common and when masters have come under my direction and supervision. I sincerely hope that the many fine teachers with advanced degrees have not too seriously resented my leadership under these conditions.

At the time of county consolidation Dr. Lloyd Drury was elected district wide County Superintendent and for two years I served again as High School Principal. Upon Dr. Drury's resignation in the spring of 1955 the Board of Trustees invited me to assume the superintendency. I would like school patrons and others to know that I did not apply for nor seek the superintendency at that time. I was urged by certain board members and many patrons to accept the appointment, probably one of my serious professional mistakes in light of recent developments. Held the position until spring of 1960.

I am closing my professional career with 44 years of actual service. The fact that this long tenure has all been in one place, I am assured by representatives of the State Department of Education, establishes some kind of a record, creditable or otherwise. I do not hold the maximum tenure record. There are, however, few other retired teachers in the state with longer period of service than mine. Superintendent Roy Weston of Aberdeen, retiring this year, and I have been referred to for several years as the deans among Idaho superintendents in terms of service tenure.

Between 1910 and 1925 a total of 1,999 Montpelier High School graduates came directly under my instruction as science and mathematics teacher, or under my administrative supervision as high school principal or superintendent. I am a past president and secretary of the Fifth District Idaho Education Association.

Organized on a volunteer basis the first troop of Boy Scouts in Bear Lake Valley, in 1910, the year the movement was started in the United States.

The first troops were not registered with the national organization ? succeeding troops became regularly affiliated. Served under and in very close relationship with District Executives White, David Watkins, and Lou Roberts for many years. I am a graduate from the National Boy Scouts Leadership Training School maintained at Schiff Reservation, Morristown, New Jersey, with the first class (from that training location) of 1935. Was awarded the Silver Beaver for outstanding leadership and service to youth by the National Council, BSA; also the Scouter's Award. Served as District Commissioner in BSA for approximately 20 years.

Inducted into the U.S. Army summer of 1918. Basic training at Camp Fremont, near Palo Alto, California. Assigned to 12th U.S. Infantry. Two days before entrainment of regiment for trip across continent and transport to France when influenza struck our camp. I was hospitalized and left behind my regiment. On partial recuperation several train loads of regimental members began the trip to overtake regiment on Long Island, N. Y. Arrived at Camp Hill, Long Island, N. Y., on November 11, 1918, day the armistice was signed. Outfit scheduled for boarding transport ship bound for France the following day. Instead sent to Norfolk Virginia, port of debarkation for guard duty for remainder of service period. Served on editorial staff for compiling and publishing "History of the 12th U. S. Infantry".