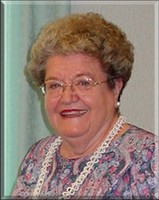 Norma Lee Brooks Collins, 79 passed away Thursday February 26 2015.  She was born November 29, 1935 in Cokeville, Wyoming to Florence Eleanor Nichols and James Lowel Nelson.  She Married Dean Joell Brooks September 14, 1957. He passed away August 26, 1985. Together they raised 5 children that all survive, D.J. (Renae) Brooks Scottsdale AZ, Deanna (Darwin) Kocherhans Orem, UT.  David Brooks (Kirk Conrado) Tempe AZ, Doug (Kay) Brooks Mossy Rock, WA. And Jerry Brooks Draper UT. Norma has 17 grandchildren, and 6 great grandchildren.   Norma Married Daniel Collins on November 29, 2003 and he survives her. She is also survived by one Brother Ron (Louis) Nelson of Kaysville UT.  Norma was a graduate of the University of Washington.  She was executive Secretary for 25 years for both the Washington State Psychiatric Association and the North Pacific Pediatric Society.  Norma loved to reading and genealogy.  She was a faithful member of the LDS Church and served in many positions.   Her favorite was serving in the Young Women' organization were she influence many young lives.  She also served in the Seattle Temple.  She leaves a legacy of love, devotion and service. Burial will take place Friday March 13, 2015 at 2:00 P.M. Riverton Crest Cemetery 3400 S 140th St Tukwila Washington. A celebration of her life will be held prior to the burial from 11:00 A.M. to 12:00 P.M. At the Seattle Stake center, 14020 Ambaum Blvd, Burien. The family would like to express appreciation to all who sent messages of love and support.